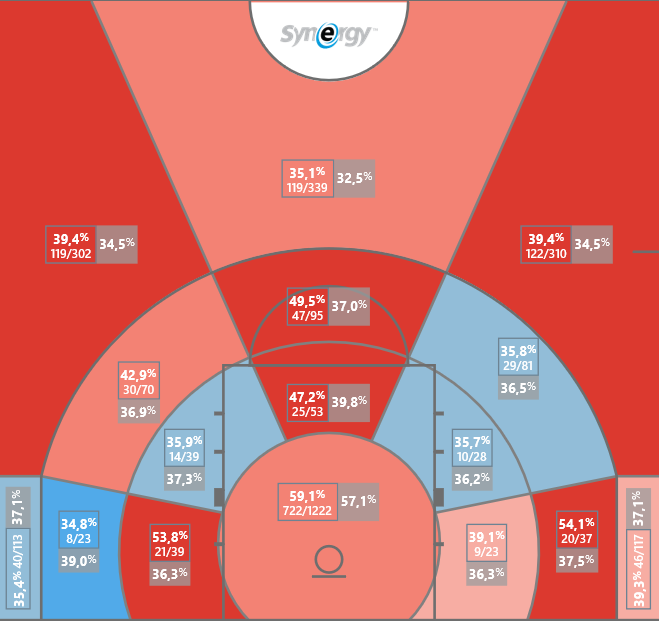 Here we see a team that’s pretty solid shooting the ball. It’s better than the average (red) in most zones, specially with high volume.

3-pointers above the break are massive in terms of efficiency and it’s nice to see the same percentage from both sides (39.4%), so probably XsOs are compensated on these areas.

That’s 59% in effective field goal percentage, which is exactly what they’re getting at the rim, so good balance there.

If you want to optimize efficiency, there are some zones where percentages go down, and it doesn’t make some sense to keep getting around 35% on long 2s or mid range shots. These account for 150+ attempts and it could be a path to optimize shot profile.

As we’ve seen before, efficiency on above the break 3s is good, both in contested and uncontested shots. Accuracy drops from the center, specially on contested, so you’d have to look at film and see if shot selection can be improved.

PNR Handling has been elite in ACB, specially thanks to Hannah (1.19 PPP – 99%ile). Besides, Todorovic is not there anymore who accounted 30%TOV on 100 possessions (a lot!).

Shooting 35% from left wing and center is decent, but check film on right wing shots as they increase up to 46%. Smaller amount, but it could be wise to mirror some sets and increase volume from the right, as they’re shooting twice as much from the left with 9% less accuracy.

Main rollers (Diagne, Llovet and Musli) have been good, all of them over 1 PPP. The arrival of Malick Dime can help boost these numbers: he’s been great this season with 1.31 PPP (on a small sample though -29 possessions- and a lower league).

Two top-4 players on shooting off screens are gone (Todorovic & Massenat), so you could give more prominence on this role to good shooters on low volume this year, such as Sy and Hannah:

Senglin didn’t have to much volume in France either, but if he’s going to play at the «2», we could see an increase if he starts strong, or even on «hybrid» off screen situations like handoffs, where he can shoot directly or turn it into an on ball situation (ISO or PNR) that he obviously prefers.